Trying to turn the assembled throng to the righteous cause.

Please sir, can I be a Grenadier?

The Regiment formed and ready for action!

The "fog of war" along Swasey Parkway.

A little relaxation time in the kitchen.

With our two Colonels on the field, what possibly could go wrong?

The end of a great weekend!

"First Shot" at the Battle of Lexington Green.

A well placed shot on the Green.

Confusion among the Officers and men. 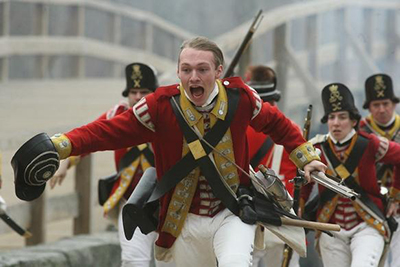 Digging the earth works on the Bunker Hill site with a little 21st century assistance.

British troops advance up the hill

Grenadiers advance on the 1st charge.

Grenadiers forming for the 3rd assault.

Light Infantry on the march.

Grenadiers after the 3rd assault

Light Infantry after the battle.

Anne and Ed in camp.